I have a short question about my residential system which is composed by 2 solar on-grid systems (one of 5.94 kW + another one of 6 kW). To can monitoring the energy production and also the house consumption, I bought 3 x WEM3080T. One of them it was installed on mains (in the general fuse box panel) and the rest of two, each one on the output of inverters. On this point, all meters measurements are correct, the produced and exported energy is displayed correct, but I have some questions.

My problem is related to the animated solar graph (Current State graph) from Iammeter which is reporting correct the solar production from PV to the House (Load), but isn't displayed the exported energy. By this, all the energy goes into the house, but nothing goes out to the grid (as in attached image. 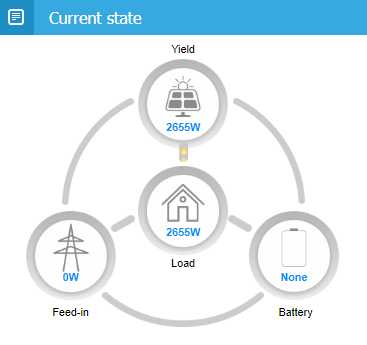 In the "All places" tab, the energy it seems to be measured correct. The meters was configured as "inverter" for two of them because it was intalled at the output of inverters and the general meter, it was set as "grid" because it monitors the energy that goes into the grid (when solar system is working).

Thank you very much in advance for your help and have a nice day!

Then you will see a correct "Current State graph".

Have a nice day.

Thanku you very much laoliu! That was the problem, I enrolled every meter as new place, no only as new meter. I corrected this and now all things is ok.

Have a nice day!

1 0 1
Looks like you are new here. Register for free, learn and contribute.
Search